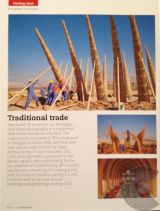 Parting Shot article in the BP group magazine, issue number 4, 2011, talks about the long Iraqi tradition going back 5000 years on the Mudhifs. Traditionally built houses or communal centers. Further pictures of the building of this magnificent tradition can been seen under Iraq in the galleries section.

This is a wonderful school year book put together by parents of the children at the school. Janet, Louise, Lisa & Elisa put the book together with design by Elicadesign.

Portraits of the children by ianmmcgregor Photography

Stagestruck used the picture of the seismic vibrators from my photo-shoot in the Sahara desert back in February. The photograph was used as one of the panels depicting BP’s Exploration activities around the world that the companies AGM

As the calendar buying season gets well under way, British oil major BP has come up with an option different from the usual ladies, gents or seasonal scenes on show. BP has supported the creation of an Angolan 2005 calendar to help renew interest in the West African country and to show some of its positive sides.

Ian McGregor worked with BP on the calendar, compiling 13 photographs of the country's best scenic views and animal characters.

One of the more inspiring photographs to be included is of humpbacked whales swimming off Luanda. For this photograph, McGregor took out a BP work boat and his own camera.

The calendar can be ordered for $10 from McGregor on +2442 637 518 and all of the proceeds go to Angolan charity Assocacao vido Abundante Escola da Boavista. The association runs schools for poor students in the war-torn country.